The concept of private mobile network has been around for years, it is an end-to-end cellular network that deployed for a dedicated group of users or devices, other users are unable to access the network unless authorized. It is deployed to provide voice or data service in remote areas whereas public mobile networks cannot reach, such as mines. Due to the lack of business case, MNOs do not take a proactive approach for the private network.

In the transition to Industry 4.0, industries are aggressive in innovative ideas to streamline processes and improve productivity. Automation without human intervention is one of the key technologies of Industry 4.0. Enterprises start to realize the importance of indoor coverage which can support high-level QoS, low latency, high mobility performance and massive number of connected devices [1]. With the existing wired and WiFi network, it is insufficient to support use cases like AR/VR applications, autonomous guided vehicles, asset tracking and positioning, as well as real-time monitoring system. A private LTE/5G network will address these challenges.

Localized spectrum around the globe

Traditionally, radio spectrum is allocated to public MNO through an auction. Since it is a licensed spectrum, private network operators can only access the spectrum through sub-leasing from MNO. To avoid interference, a private network is only deployed in the area where MNO has no deployment. This imposes restrictions and limitations on private enterprise networks.

When the growth of IoT connected devices is becoming strong, telecom regulators around the world start to reserve or allocate dedicated spectrum for a private network. Countries like Germany, UK, US, Hong Kong and Japan have already allocated spectrum in the frequency band around 3.5GHz, 4.9GHz and mmWave for private 5G network. It is believed that other countries would follow the same steps.

The following figure shows spectrum allocation for private networks as of November 2020, based on the public information available from the internet. 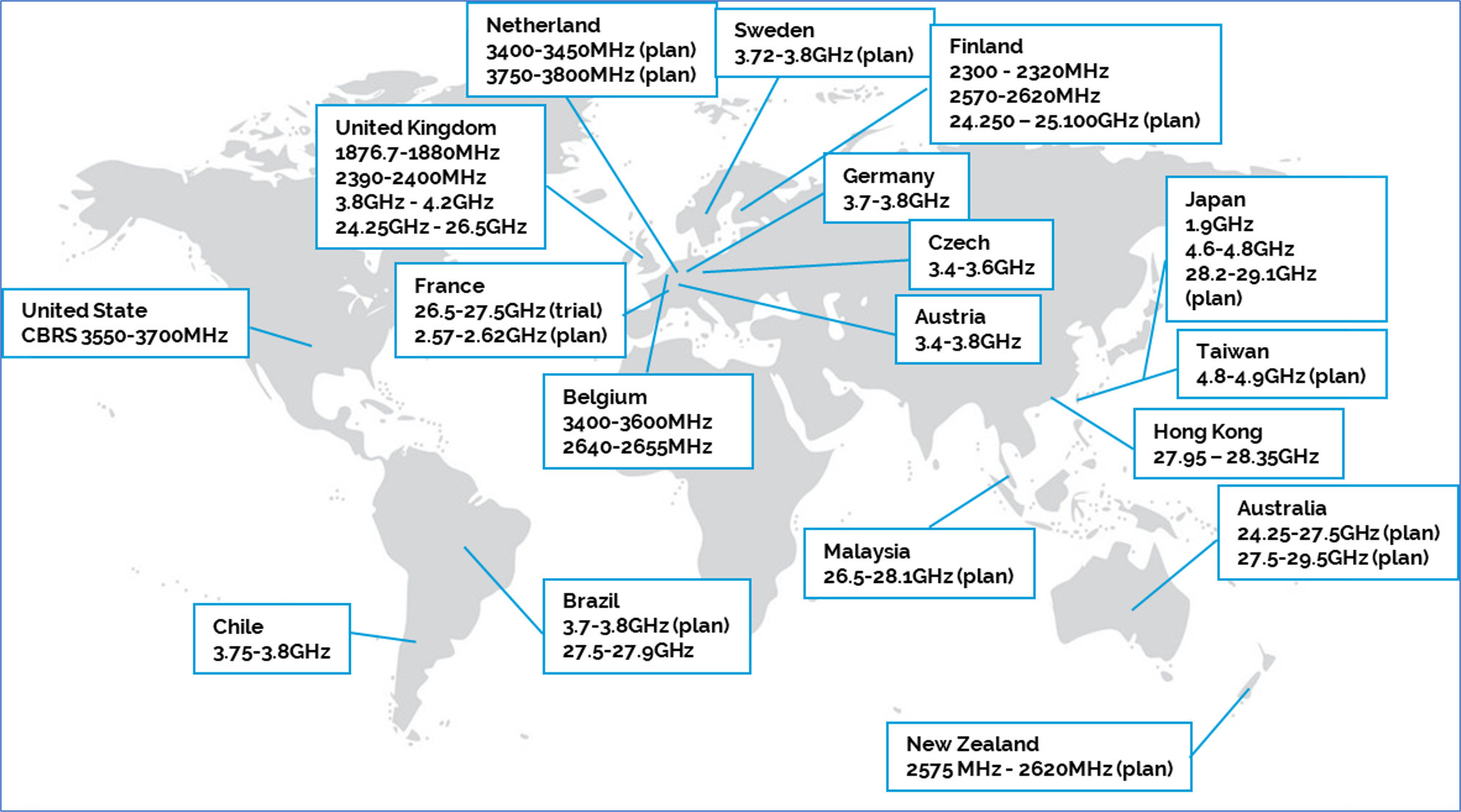 As a private network is not as common as a public network, there is no standardized deployment model. Its network infrastructure is usually owned by the enterprise, which is built either by network equipment vendor, neutral host or MNO. The most common network architecture in the market includes fully private, hybrid network or MNO's network slicing.

• Hybrid Network: RAN, Edge and application server, as well as Core network deployed on-premise. The management server will be installed in the cloud which is managed by a third-party host.

Not all enterprise has the expertise to evaluate the best solution for their own network, perhaps only top-tier corporate has the resources to employ an in-house team to perform the task. To fill this gap, most of the enterprises would prefer to work with network provider that offers a complete portfolio embracing indoor and outdoor small cells, base station, core network, MEC and cloud server, applications, as well as user equipment. It involves different vendors ranging from telecom equipment, cloud provider, IoT devices to software companies.

Mun Kek Seng has been working in the telecom industry for over 10 years with rich experience in in-building DAS design, RF planning, and optimization. Mr. Mun is currently the Assistant Manager at Comba Telecom, responsible for In-building design and technical marketing support for Comba’s global business.